Becoming Human is four people (Marji Zintz on vocals, guitar, and percussion; Jim Kunkel on guitars; Mickey Kopchak on bass and vocals; and Ron Wilson on percussion) who have been making lots of music for lots of years and are coming together now for this special, artful, moving, evocative project.

Vocalist/percussionist Marji Zintz fronts the group, which performs music composed by guitarist Jim Kunkel and bassist Mickey Kopchack. They explore and inhabit many genres across the musical spectrum, from folk to jazz, modal to avant-garde, spiritual to classical to Brazilian. They honor the space and each other’s unique “voice,” creating and holding a fertile ground for conversation, interplay, improvisation, and emotion.

Marji brings a long and diverse performance resume, working in myriad settings since the 1970s as a vocalist and guitarist. She has performed in voice/double bass duets with such notable players as Mike Richmond, Jay Anderson, Josef Pelletier, and Vin Warner. She also worked in a progressive jazz-based ensemble that included Erik Lawrence on reeds and Jim Kunkel on guitar, often using her voice as one of the horns. She has worked in collaboration with improvisational vocalists Victoria Christgau and Shula Ruth Weinstein in a mostly a capella recording and performance project called Sister Sound, and has arranged, recorded, and performed with many other innovative musical projects over the years as well as performing as a soloist. She teaches guitar and coaches voice and harmony in the Hudson Valley.

Versatile guitarist Jim Kunkel has composed music for independent films and documentaries such as the Aspects of the Arts series profiling poet Dan Masterson and artist Frederick Franck. As leader and sideman, he has performed and recorded since the late seventies, including a quintet that performed many of how own innovative compositions. Jim has a long list of people who have studied with him over the years and have gone on to enjoy a successful music career.

Mickey Kopchak has been playing bass professionally since the age of 10. Known not only for his sensitivity and presence, Mickey expands the sonic assignment of the bass by tastefully employing a multitude of interesting effects, creating rich and expansive soundscapes, as well as reaching emotional depths. Because of his versatility, expertise, and dedication to excellence, he is widely sought after and has performed and recorded with jazz and pop artists throughout the northeast.

Ron Wilson’s varied resume reflects his wide range of musical abilities. He has graced the stage with a lengthy list of accomplished artists (Mitch Ryder, Mick Jones, Mark Lindsay, Badfinger, Dee Dee Ramone, Gary US Bonds, and the Guy Lombardo Band to name but a few). Ron is currently working as musical director for Lou Christie. Some of his other credits include performances with the Hudson Valley Philharmonic, the Greenwich Symphony Orchestra, the K-Rock WXRK Christmas Show and several Off-Broadway productions.

Ron is known for his musical creativity and professionalism. We love him because he loves what he does.

N2K is a composers collective disguised as a jazz trio. The group’s original music runs from traditional to fusion to funk to rock to folk to the avant garde. A cohesive sound is created thru their respect of dynamics, space and sensitivity to the moment, allowing breath and freedom of expression while always honoring form.

Jim Kunkel has composed music for independent films and documentaries such as the Aspects of the Arts series profiling the poet Dan Masterson and artist Frederick Franck. As leader and sideman he has performed and recorded as a guitarist since the late seventies. He was absent from the performance scene for 8 years while focusing on the healing arts. This Amity performance marks his return.
Mickey Kopchak has been playing bass professionally since the age of 10. He has performed and recorded with jazz and pop artists throughout the northeast ever since. Known not only for his sensitivity and presence, Mickey expands the sonic assignment of the bass by tastefully employing a multitude of effects creating rich and expansive soundscapes.

Al Natoli is a drummer that listens closely, responding in the moment with the sensibilities of a seasoned arranger. A multi instrumentalist, Al composes most often on piano and guitar,the drums being his preference for performance. His talents have brought him as far off to recording sessions and performances in Paris, France but he keeps it all closer to home these days performing in the Hudson Valley.

Guitarist Mike Jackson will perform with his trio featuring Rave Tesar on
keyboards and Tom Cabrera on drums, two great musicians he has performed
with for more than 30 years. The trio has developed a unique simpatico
relationship. The July 30th performance will feature original music, jazz
standards and popular favorites.

Originally from Washington, D.C. — where
he began playing the guitar at age 12 — Mike Jackson has performed in and
around Orange County and throughout the tri-state area since 1981. He is
well known as a performer and as a music teacher and educator. During his
career he has performed at venues throughout the United States, Europe,
Scandanavia and the South Pacific. Mike has been featured at the Hudson
Valley Jazz Festival, the Goshen Jazz Festival, the Newburgh Jazz Festival
and at many other musical events, public and private. In 2014 Mike
received the Lifetime Achievement Award from the Hudson Valley Jazz
Festival.

Saturday May 23rd at The Amity Gallery

Guitarist and composer James Emery  performed with bassist John Arbo and violinist Rob Thomas. A full house and a great response to the music made for a great evening. 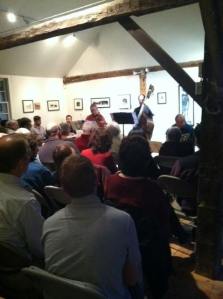 Amity Gallery’s mission is to provide a venue for cultural events including art exhibits, performances and workshops to the Warwick community and the Hudson Valley.